Common Network Issues and How to Resolve Them Fast

Networks are networks. Despite best efforts to keep things smooth all the time every day, things happen. Here’s a look at some common network issues, some tips for quickly resolving them, and even better, how to prevent them from occurring again.

Network problems impact things like, VoIP calls, ERP applications, files downloads, and more. Anytime a bad connection prevents you from accessing something outside your computer, you’re likely dealing with a network problem.

Network problems are frustrating and left unattended, they can have disastrous consequences for your business network. That’s why it’s important to understand what can go wrong with your network and to continuously monitor network performance to quickly identify and fix network problems even before they affect your end-users.

Downloads consisting of large files that are being placed on your computer’s hard drive from the Internet, like file transfers or backups, can drastically increase bandwidth usage. The more bytes the file contains, the higher your bandwidth usage.

Packet Loss occurs when a data packet is dropped during its journey across a network and never makes it to its final destination and back. It can cause many problems depending on how much of the packet does not go through and how often it occurs.

How to Resolve Them Fast

When the clock is ticking, network repair can’t wait. Whether you’re fighting printers that won’t respond, a network that’s slowed to a crawl, inconsistent connectivity, or a cyber-attack from disgruntled ex-employees, bored teenagers, or devious competitors, you need to know your problems will be short-lived. Small problems in your network can quickly pile up into bigger ones impacting your entire organization—and that’s not even considering how such problems might affect your reputation, as the issues begin to impact your clients and customers.

DNS Problems.
Errors such as The Network Path Cannot Be Found, IP Address Could Not Be Found, or DNS Name Does Not Exist, can usually be traced to a DNS configuration issue. The command-line utility lookup can be used to quickly show a workstation’s DNS settings.

Slow performance is typically due to congestion, or sometimes poor quality connections that have corroded or otherwise deteriorated. Congestion may not be directly related to bandwidth exhaustion, as a single overloaded port on a switch or router can diminish network performance.

This can be especially true on leased lines where dedicated bandwidth is to be expected, but speed tests indicate the network is not reaching it’s rated potential.

The Quick Fix: Use speed test websites, conducting tests from geographically remote servers. This can pinpoint areas of congestion on the ISP’s network. In the case of cable internet, the local network is shared amongst your neighbors, committing your ISP to a costly bandwidth upgrade when saturation occurs. Report your findings to your ISP so that they can take steps to resolve the issue.

DNS servers are an often overlooked aspect of internet performance. Using incorrect DNS servers can result in routing congestion or load balancing problems. While you should typically use your ISP’s DNS settings whenever possible, they may actually be routing traffic through overloaded web caches. You can temporarily adjust your DNS settings to use OpenDNS instead. 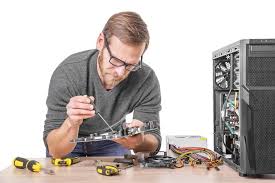 Networks are the core of IT infrastructures. Poor configuration or faulty setups will inevitably lead to lost time, productivity, and revenue. Companies need comprehensive IT support to manage everything from network cabling, upgrades, repairs, scalability, and more to keep operations running smoothly.